Did you know that zoos often sell so-called “surplus animals” that they no longer have space for or that are too old for questionable animal dealers to their operators? Large zoological institutions such as the Berlin Zoo and the Tierpark are also involved in the shady trade in animals. Most animals sold end up in shady establishments or even in the cookware.

In February 2011, at PETA Germany we filed criminal charges against several zoo managers and German animal dealer Werner Bode at the Public Prosecutor’s Office in Osnabrück. After evaluating hundreds of leaked classified documents, many zoos could be accused of collective “bartering” of so-called zoo animals.

Berlin zoos in particular were heavily involved in the animal trade. But zoos in 16 other German cities have also provided supplies to Werner Bode – including the zoos in Aschersleben, Hoyerswerda and Karlsruhe. 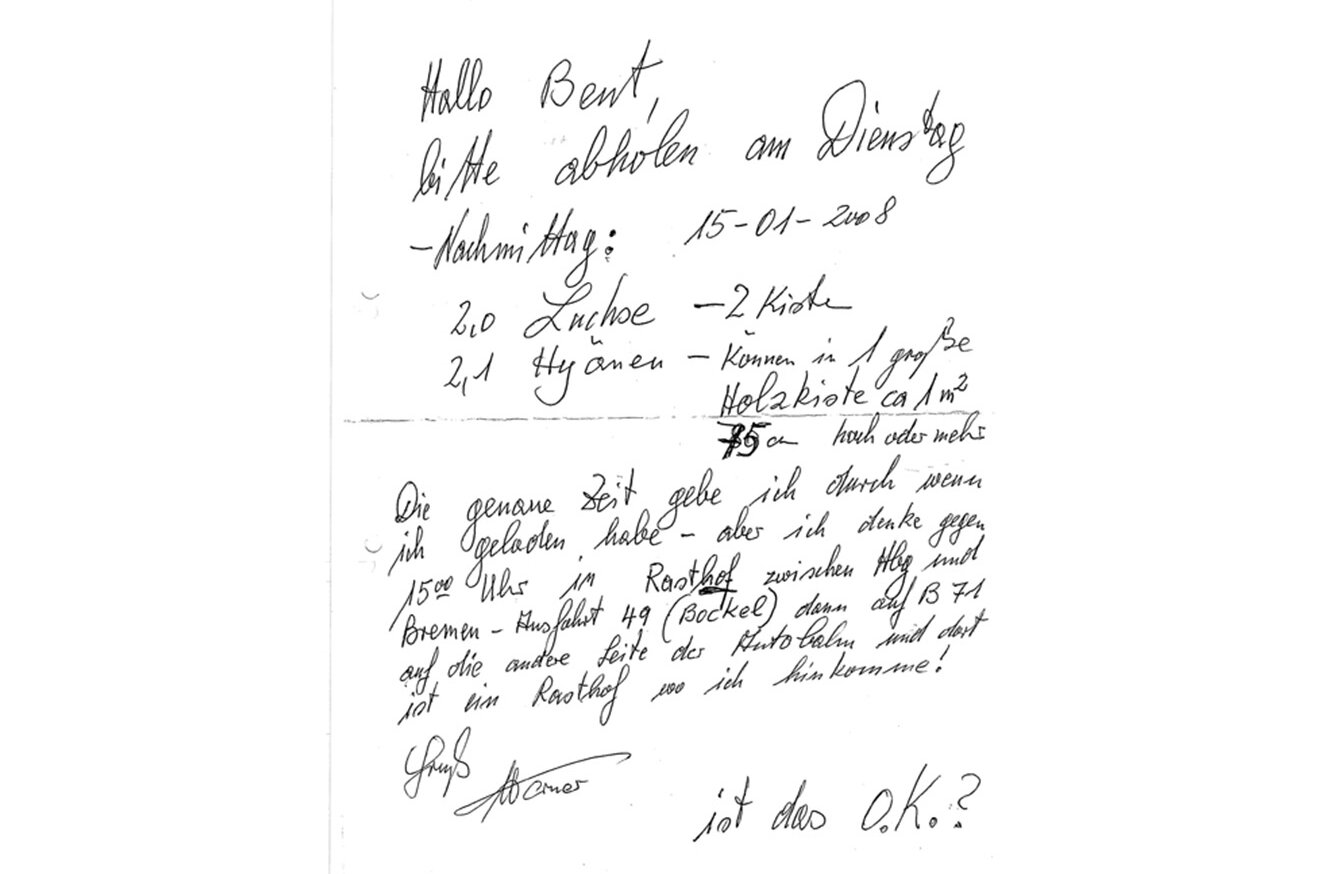 Some animals are even delivered to rest areas on the highway. 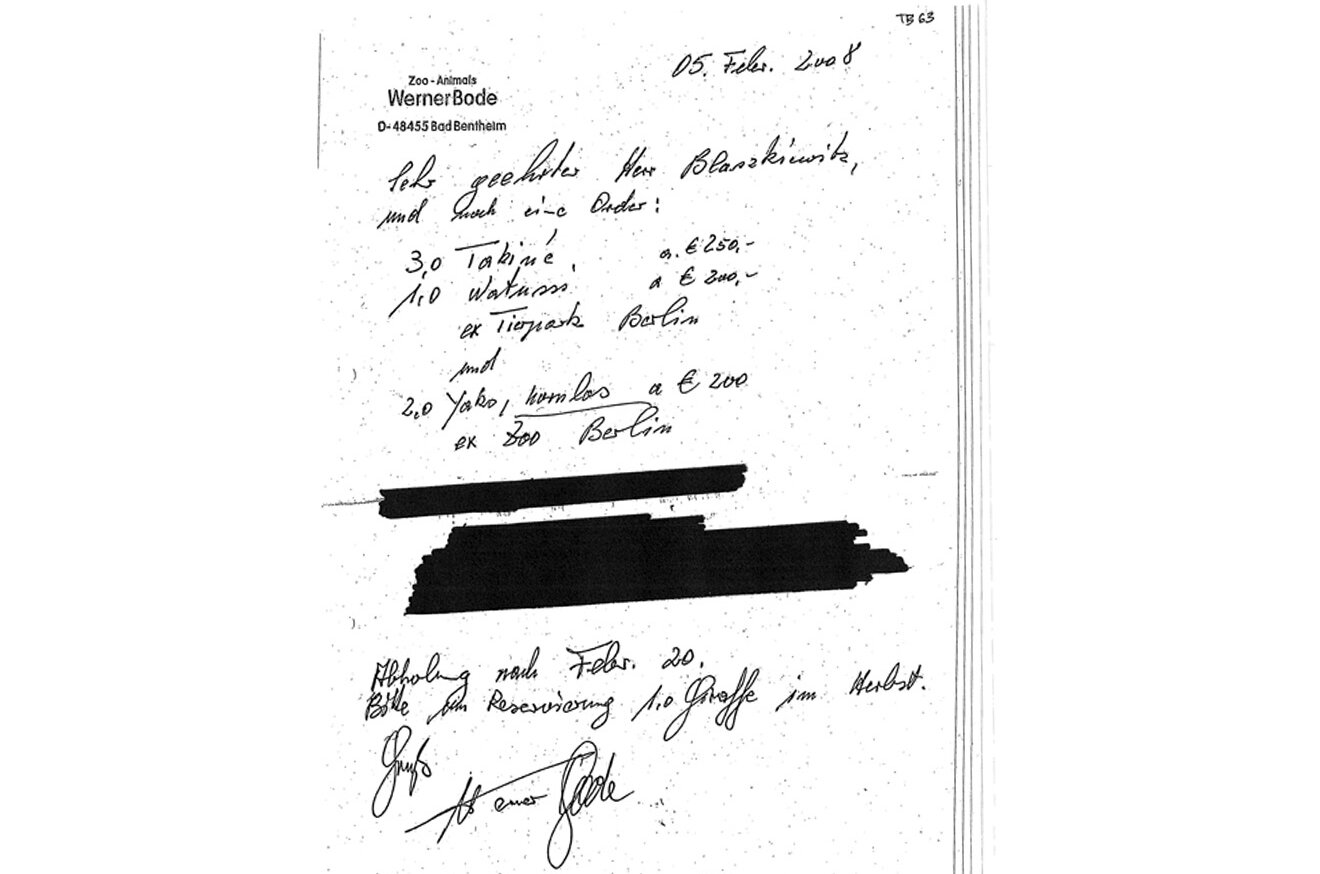 As in the flea market, animal dealer Bode notes his asking price manually in his bids.

Above all, old “neglected” animals and young, reared or “undesirable” animals are sold. According to the information we have, the animals were sold by zoos to Werner Bode at scrap prices, who in turn sold them to private zoos, zoo slaughterhouses in Belgium, Chinese farms, pet dealers and even restaurants and animal testing. laboratory. Some of the animals were delivered at rest areas on the highway. But there are many unscrupulous animal dealers that zoos deal with. Despite this revelation, handling of animals from zoos continues unabated.

Zoos are violating the duty of care

By trafficking animals, zoos are violating their supervisory duty, because according to their own federation guidelines, zoos are obligated to ensure that animal recipients have an “appropriate accommodation” and “care for the animals.”

Trading with animal dealer Bode and with other buyers usually follows a similar pattern and essentially serves zoos to create space and dispose of supposed “excess” animal stock without having to kill them themselves, according to animal welfare law at least in theory forbidden. Many of the animals were sold to other zoos via Bode. Instead of exchanging animals with each other, as stipulated in the zoo’s guidelines, animal dealers like Bode have the opportunity to buy exotic animals at “junk prices” and add a decent profit margin – at the taxpayer’s expense: indoors. Because many large urban zoos are backed by taxpayer money in the millions.

had two zoological institutions in Berlin, Tierpark Friedrichsfelde and Zoo Berlin, from at least 2007 to 2009 1363 animals Barter by Bode or for sale. For this approx. 369,170 EUR It poured into zoos, mostly in the form of cash. As in the flea market, animal dealer Bode noted his price forecasts manually in his bids. The low value of “commodity animals” is evidenced by documents in which, for example, Bode ordered an oryx antelope “of this year’s offspring” from the zoo director at the time or Bode set the value of ten green iguanas and five striped basil at zero due to the low price of Wholesale.

The Berlin Zoo has also sold strictly protected animals in Bode and on the Red List of Threatened Species, such as jaguars and salt cats. Although these animal species can be exchanged between zoological institutions, drawing via Bode would likely constitute a violation of the Washington Convention on International Trade in Endangered Species (CITES). However, for Baud, zoos provide the necessary CITES papers at the same time.

Even the documented quantitative scale of this animal trade violates the express “exceptional character” that applies in relation to the killing of animals from zoos under the Animal Welfare Act. [1] This also states that zoo animals should only be reproduced if species-appropriate housing is secured for the offspring. [2]

Zoos Aschersleben, Hoyerswerda and Karlsruhe: the animals sold disappeared without a trace

Between 2005 and 2008, the Aschersleben Zoo sold 75 animals to the animal dealer Bode for about 60 thousand euros. And Bodhi, in turn, usually returns the animals to other animal dealers – sometimes with huge profit margins. The Aschersleben Zoo didn’t want to admit that many animals had disappeared in an unknown way after being handed over to Bode and turned their eyes to reality despite our attempts to explain.

Then the zoo indicated the whereabouts of 17 animals – but More than 90 percent Of the animals handed over to Budd, they disappeared without a trace. In addition, only the state of four animals is named, but there is no zoo. To this day, we have not been able to locate a zoo in Italy where four Barbary macaques are said to have gone. Oddly enough, a large number of animals from zoos all over Germany also went to Skaerup Zoo in Denmark. We assume that these could be fictitious addresses and zoos.

Hoyerswerda Zoo also sold the animals to animal dealers between 2006 and 2008. According to the tax rolls, many of the animals went to the animal dealer Janssen, who was dealing with Bode during this period. However, neither the zoo nor the city could locate the abandoned animals, and Jansen was also silent about it. The city of Huercerda clearly does not care what happens to the offspring funded with taxpayer money.

In 2006 and 2007, Karlsruhe Zoo sold 20 to 40 antelopes, a kangaroo, three cattle, and a guanaco to animal dealer Bode. Us as well as on TV shows Deputy Director of the Zoo Dr. Clemens Becker that the animals were housed in Mr. Boddy’s Wildlife Park and that they will be moved from there to “Gronau Animal and Bird Park” in Bad Bentheim. However, this zoo and wildlife park does not exist.

Zoos do not pay sales tax on trade in their animals. The legislation allows establishments to regularly rejuvenate their animals and exempts them from tax liability for this. This system creates an unethical incentive to continue raising and selling animals.

Zoos sometimes sell animals they don’t need at bargain prices. Profit margins at pet dealers like Bode are colossal and go as high as 100%. But Bode only mentioned the minimum income, which is why we also sent the documents to the responsible tax authorities.

what you can do

The suffering of animals sold to pet dealers is just the tip of the iceberg. Every day, animals in German zoos are killed, afflicted with behavioral disorders and depression, and live a life of captivity and misery. Please never visit the zoo and instead rely on an animal-friendly alternative.