Press ConferenceMarcelo could be the fifth Champions League winner with Real Madrid, while Thibaut Courtois has his sights set on achieving his first Premier League victory against Liverpool. In addition to coach Carlo Ancelotti, the two professionals will also answer questions at the semi-final press conference.

Before Liverpool – Real Madrid: Marcelo on …

… Champions League Final (Saturday, 9pm, on REAL TOTAL LIVE, on DAZN and on ZDF): “We are very happy, we have played this competition for a long time and we know how important it is. We have a great season and we deserve to be in the final. There is a great desire to play and win the final.”

… Karim Benzema: “We know what quality and qualities a leader has. Not only is it his season, he has been playing very well for a long time. He is a leader in the team and it is not necessary to speak more or less. With his personality and his presence alone, he helps the team a lot.”

The nervous situation before the Champions League final: “My nerves have been there since we got to the final. We know what it means to play the final, to defend this club, and what can happen. During the night and before the game starts, anxiety will build up again, which is normal. I have been elated since I moved.”

… Ancelotti: “I have known the coach for eight years and I am fortunate enough to train under him. Apart from the fact that he knows a lot about football, he knows how to lead a good team. Obviously, it is normal for everyone to want to play and be important. From my point of view. We’ve had almost no problems this season, and that’s up to the coach. He reassures us, he always tells the truth. At the end of the day, we all want to be important and we are.” 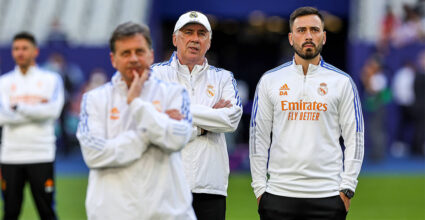 Ancelotti Hutt: “About to get the most out of the season.” Continue reading

…the last: “I played my first Champions League final eight years ago and haven’t won the title yet. The whole team has the same hope, be it the first or the fifth. We want to win and add to the history of Real Madrid.”

…a real history as a scary factor: “Liverpool actually played a final against Madrid in 2018. When you meet Real Madrid, you know: if they play a final, they win it. I myself am now on the good side of history.”

… Liverpool attack: “The defense has to work well, but that has to do with all the players. We know the qualities of Liverpool.”

… Ancelotti: “The team’s good dynamism is due to the technical staff. We train well and we also know that the staff have to decide who plays and who doesn’t. The coach handled it very well, everyone had their bets. That’s why we are where we play.”

Marcelo before the Champions League final: “I don’t need a statue”

Marcelo could be the fifth Champions League winner with Real Madrid, while Thibaut Courtois has his sights set on achieving his first Premier League victory against Liverpool. In addition to coach Carlo Ancelotti, the two professionals will also answer questions at the semi-final press conference.