Does the festival need a director at all? FID Marseille stands for Year Zero as always the diamond in the rough for cinema – and celebrates the cult of genius with Albert Serra and Mathieu Amalric, of course with a wink.

As soon as I arrived, I met Albert Serra and Jean-Pierre Rum, one by one. One is dedicated to a retrospective here in Marseille, and the other threw in the towel after 20 years as festival director. However, 2022 isn’t quite the first edition without him, as he still picks up some parts of the show before announcing his departure at short notice in January. The search for a new festival management was abandoned a few months later in favor of a no-management solution, with a management committee. The previous selection committee also remained in office.

An invitation to the center

And he’s doing a great job: the International Film Festival of Marseille has occupied a very special place in the concert of international film festivals since it freed itself from the restriction of the documentary genre under Rehm in the early 2000s. By giving a forum to those films that have difficulty elsewhere, that fall through the cracks, and that see their vocation between genres and genres, in experience and in freedom of expression.

There is hardly a movie that touches and moves everyone equally at FID Marseille. On the long, warm nights there is indeed a lot of discussion about films, animations and controversy, but with such an inherent curiosity in a festival where there are so many awards but so little industry connection to win. The guests (apart from the filmmakers, who are mostly from France) are not here to prove themselves, but because they belong to this group of ardent filmmakers, whose questions about form are always understood first and foremost politically.

around the clouds (Sobre las nubes) by Argentine director Maria Aparicio is a stroke of luck. The way her characters create and tell their stories reveals with great simplicity that she sees her work as a humanitarian project, exploring the context of work, love, family, hope and conviction. The director gives herself plenty of time for this and, despite her sincere interest in the stories, dispenses with a broad or extensive explanatory arc. The black and white photos focus on people who are unrelated to each other, and who only live and work – or are looking for work – in the same city, Cordoba. The instability of a dream about another life is not understood, but as the daily dealing with small and big goals.

In one of the countless beautiful scenes, a father makes a device out of a shoebox for his daughter so that she can see the solar eclipse without having to spend money on special glasses. In another scene, a cook locks up in a restaurant and makes his way through storage rooms, back doors, air shafts, and the like into the hallway of an apartment building from which he doesn’t escape as fast as he can, preferring to hear two young women playing guitar.

Lluis Galter takes a completely different official path in filming his work on DV videos after the sun. The Spanish director relies heavily on a connected anecdote to enable all kinds of tricks: In a semi-compiled montage of holiday impressions, Galter follows the story of a kidnapped child who one day disappeared from a beach. An old man tells us about it in potential documentary photos, and the children tell each other about it at night in the tent with a flashlight to give them a crawl. Pictures alternate between harsh And artificial, sometimes they look like they spring from a mechanical context (like a surveillance camera), sometimes they’re home videos, but they’re often composed as if they were meant for the next old ad. Tricks include volume level, which repeatedly puts a synchronicity of the pseudo-after-sound on images, multiple times in German, perhaps the most terrifying language ever? 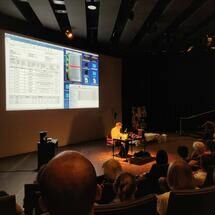 Matthew Amalric is particularly fascinated by the German language and German-speaking culture. In Marseille, he appears not only as a director and as a movie lover – his chosen films are shown by him alongside his rarely seen works. It also presents to the festival a specially designed show in the basement of the Museum of European and Mediterranean Civilizations (Mucem).

Gimmick: The 90 Minutes of Mathieu Amalric’s creative process settles somewhere between clichés, wishes and reality. He was said to be sitting at a desk, in the middle of filming a 52-part series, Robert Mossels man without traits Without a script adapted directly from part of the novel. Amalric imagines a sleepless night for himself, not without referring to the idea of ​​a restless genius who presses herself with the greatest effort until the art is complete.

His inspirations can sometimes be seen on the screen in the background, but his laptop screen is often moved, as the shooting schedule, notes, and scanned book pages are pushed back and forth. From him, he contacted Vicky Krebs, assistant director Amandine Escoffier, and fashion designer Caroline Spieth. He lives everyday life and imagination overlaps.

Albert Serra is also always available for the cult of genius, as his intoxicating master class proves once again: If you believe in Serra, there is only one truth, and that is his truth. Everything else is traditional. One question, only one, the moderator asks at first, and Sera talks like a waterfall for over an hour, shedding wisdom and theories about filmmaking as if they were recipes.

This culminates in saying that only a digital camera allows for real cinematic experiences, because for them duration is very important and the actors have to give up how they act for the sake of the camera. This is why it shoots first with three cameras and secondly digitally (analog film cameras can only record for a relatively short time before changing the roll of film). It is a pleasure to listen to Sera’s theory because everything makes perfect sense, shows great interest and dedication, and in short form, it is very close to a caricature or just nonsense. This is also FID Marseille. Again, it makes you want more.