Meowing, sleeping and looking incredibly cute: a cat’s life is really beautiful! In Stray, you play as one of these fluffy four-legged friends and explore the world with your AI friends. Through a series of events that we will not explain in detail for spoiling reasons, you suddenly end up in an isolated online city without your companions. Your goal now is not only to find them again, but also to escape from the encircled area.

You quickly get acquainted with the inhabitants of this mineral world, who lived much longer than their human ancestors. They inhabit the city and imitate the people who used to live here in many ways: they gather for a drink at the pub and go about their daily activities. Many of them are very playful and have distinct personality traits that you rarely see in this diverse group of robots.

Despite their metallic appearance, the inhabitants of the world all seem to be very human and quickly gossip with their stories and destinies in your heart. They speak a foreign language that you can only understand and answer thanks to your friend from your B-12 drone. Oddly enough, this flying robot can also understand your meow (or is it reading your thoughts? Who knows…)

You will quickly find that your velvet paws can explore every corner of the first city, but they cannot leave the city. Not only is it circled horizontally, but the sky is littered with artificial lights that look like a starry sky. It’s a bit like living in a tightly closed can with a lid.

But to find your friends, you have to get out of there! However, getting out of the closed city is not so easy, because voracious enemies are waiting for you in front of the city walls. Monsters that look like XXL Ticks (but aren’t) will chase and suck blood from your body on contact. Since creatures can even bite through metal, many robots are very afraid of them. But with your speed, you may have a chance to escape from it.

From adventure to corridors of horror

Stray’s adventure seems like a magical story at first glance, right? Don’t let this fool you! The situation and mood of the game completely changes after just a few hours and you may think that you are in a horror game. However, the longer you play, the cooler the sites get. Little stray wandering a little! From quiet villages to the sewage system: there are stories to be discovered all around, which often also have critical social backgrounds.

From fighting to stealth

As a cat, you have very limited options to defend yourself against attackers. You can’t hold a shield or a sword and your tender feet lack magic. But with the help of your drone and some upgrades, you can attack your opponents. And if all else fails, you run. Hardly anyone can follow your clever paws. 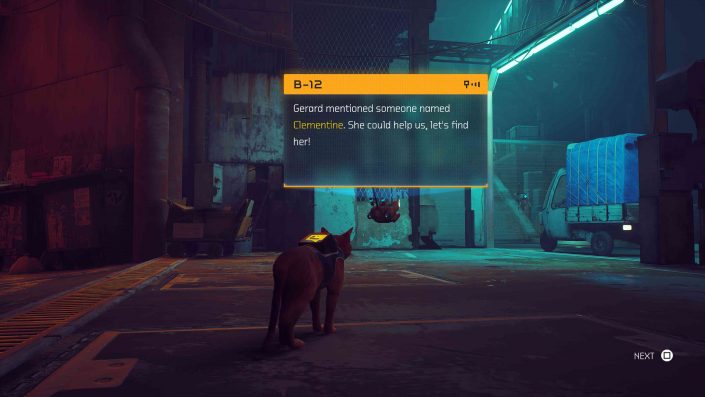 So that “Stray” does not turn into a shooter, you lose your weapon again very quickly and have to find other ways to beat your former enemies. You can hide, for example, as one or another stealth passage is included. You may have already noticed that “Stray” has so many different game mechanics that it’s hard to get bored here.

Stray feels like an open world game because of the vast areas. Your freedom of movement is sometimes overwhelming, as the areas offer many hidden paths for you to explore. Here and there, the NPCs have mini-quests for you, which usually send you across the current area. Sometimes you have to find the right items for a coat, other times someone wants very special flowers. In principle, it is always about finding a certain item and bringing it to someone. They are always packaged a little differently and therefore it is not noticeable that the types of tasks are often quite similar.

Speaking of NPCS, many bots are displayed in amazing detail and respond with emotion on their screen when you talk to them. There is even an option to hug each other, which will put a red heart on display for them. If you upset them, for example, if you destroy something from them, they will become very sad.

The whole game is also filled with Easter eggs: there’s a tangle of cables in the ramen bar, since robots naturally don’t eat organic food. On the other hand, in the pub, they sprinkle their favorite drink on the face instead of drinking from the bottle. In turn, they like to pursue everyday pleasures that they have copied from people. For example, robots in different areas of the game go to the hairdresser or play D&D in their spare time.

Basically, there are only two major building locations in ‘Stray’ that really spoil the feel of the game. On the one hand, we’re already missing a small map here. Many adventures pass without a mini-map and partners, but usually the possible paths are clearly marked and recognizable. In a game like Stray, where you can (and should) explore vertically, it’s easy to lose track of things.

Especially in big cities, which offer many paths and like to look the same everywhere, even in partial shade. It is great fun to explore large spaces on different tracks. But if you spend 20 minutes searching for a specific apartment, you will quickly get frustrated. 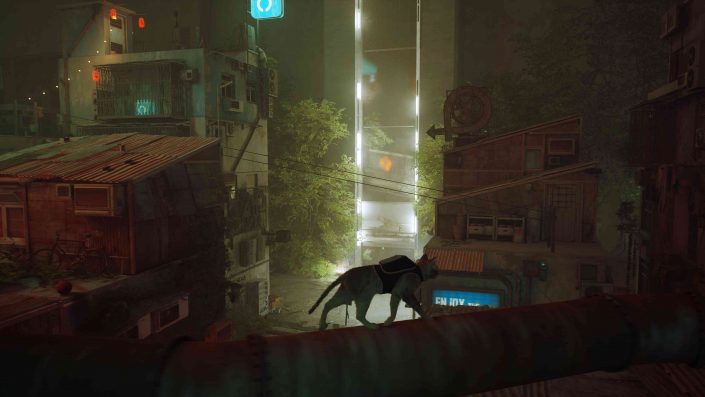 You don’t have to do without tracking tags entirely, but they simply aren’t enough. Because after a few minutes we no longer need the street signs that lead you to the top four merchants in the first district for example. They are all placed at ground level and can be found quickly. Quite different from the small entry window of an NPC’s apartment, somewhere in the slums of a neon city.

Another problem is your cat’s movements, which appear smooth and flawless at first glance. Don’t get us wrong, we haven’t seen such a vibrant kitten in a video game in a long time (if at all!). It’s great how she cuddles, sleeps and licks her paw after she’s been hurt. But when moving in an open area, it is always noticed that your plane was not developed by a huge team. So while it looks like you can jump anywhere, it just isn’t. There are trigger points that you have to head to, otherwise the little one will get tangled up.

This isn’t too bad for exploration and for the most part hurts a little immersion, but in frantic sequences it can sometimes lead to death. Since you often can’t fight, but just run, every second counts. While evasive maneuvers often work fantastically, sometimes the four-legged friend simply doesn’t jump over the bridge because the curve was too steep or the steering wasn’t accurate enough.